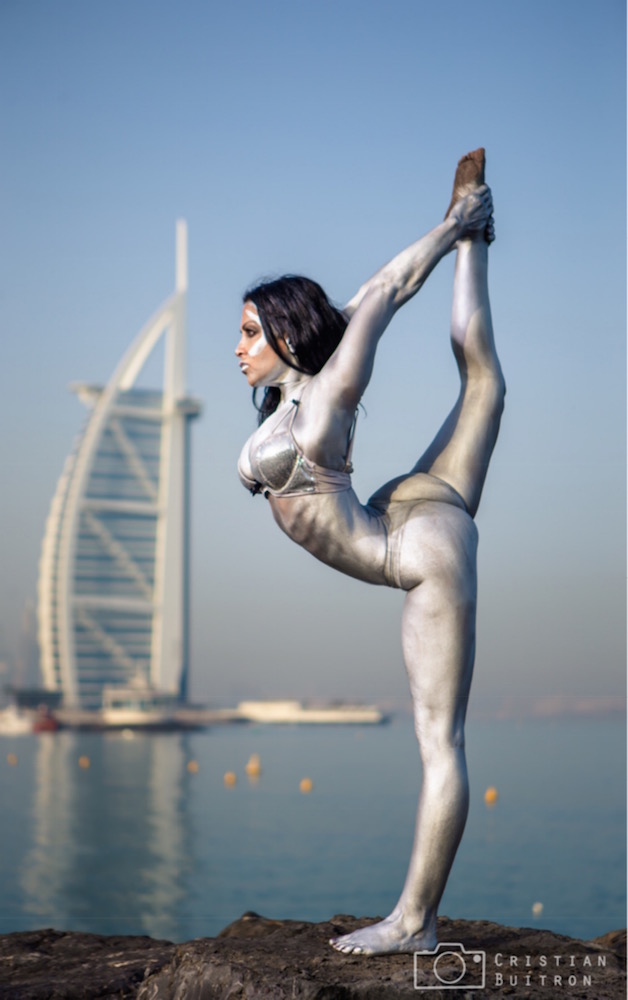 Angela is an aerial dancer / acrobat from New York, with performances all over the world. In New York not only did she dance in the biggest venues such as Webster Hall and Melrose Ball- room, but she also performed in the popular reality TV show ‘My fair wedding’ in ‘We’ Channel USA.

As an aerial dancer / acrobat, she performs on aerial silks, hoop, moon,net, straps, chains, hammock and and doesalso shows and bottle service upside down on the lollipop hoop. Her performances also involvewater bubble, fire-fans show and duet acro-yoga.

Her background in gymnastics is enormous as she was involved in it from a young age in Athens Greece. She studied aerial acrobatics at Body&Pole in New York, did several workshops with Cirque De Soleil acrobats and seminars at Circus Warehouse and Aerial Arts in USA. She is a certified yoga instructor as well and has been teaching workshops for aerial acrobatics abroad (Greece, Italy, Cyprus, Oman, Dubai, New York, etc).

As well as her dance and acrobatic skills, Angel is also a renowned Greek American DJ that has been in the global music industry for 15 years and counting with performances in high-end clubs, beach bars, 5 star hotels, private/corporate events, etc. Her parties in Mykonos island (Super Paradise, Guzel, Space club), her monthly residency in Nikki Beach Midtown Manhattan and her guesting in famous venues worldwide, are only few of the gigs that have marked her career, along with the big collaboration with the popular Italian Nicola Fasano (producer of Pitbull’s massive hit “Calle Ocho” (I know you want me).